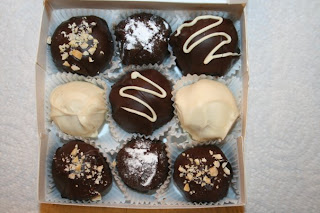 Today our family participated in a vegan bake sale to benefit victims in Haiti. My husband and I have been busy the past couple of nights making vegan truffles (above), peanut and pecan brittle, and white chocolate chip macadamia nut cookies. They were all a big hit! All in all our efforts raised money for a good cause.


We wanted to be sure to include it as a lesson to the little ones about helping to make a difference in the world. If there is one thing a toddler can understand, it is making/purchasing goodies to raise money for a charitable organization. What kid doesn't love vegan cookies, chocolates, muffins, cupcakes, and brownies?
Our eldest is still a wee three year old, so I tried to keep the explanation simple. It needed to be summarized in three year old speak, which isn't always easy when the subject matter involves the devastation caused by a massive earthquake. We explained people's homes fell down and they needed help to rebuild them. The animals in Haiti needed help as well. When I compared it to help for our animals if they were lost, that really hit home for him.
This is one of the many ways we plan to teach compassion to our children, through the importance of donations and particating in charitable fundraisers. They will learn more about it next month too at the Kiddie Karnival at their school. We'll be donating to the silent auction and have Elliott help pick out what we buy. It is part of the vegan values we hope to instill in our children.
at 9:09 PM No comments:

Email ThisBlogThis!Share to TwitterShare to FacebookShare to Pinterest
Labels: Parenting

Today I made a batch of Peanut Butter Chocolate Chip Cookies for Ladies Poker Night. It is a good thing too, because if I had these around here, lets just say my quest to lose the last of my baby weight would be setback. That was until I found out it was cancelled, but I have faith in my husband to polish off a decent amount of them. The kids will do their part too. Elliott proclaimed them tasty, delicious. Their quota will be limited though, as we don't want them to fill up on cookies. Tomorrow I plan to bring some by our neighbors house, as a thank you for so kindly snow blowing part of our driveway on Christmas Eve and Christmas Day.

I adapted this from a recipe, and made some modifications, like adding the chocolate chips and rolling them in sugar. Here are a couple pictures of them. See below for recipe. 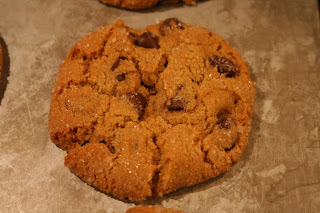 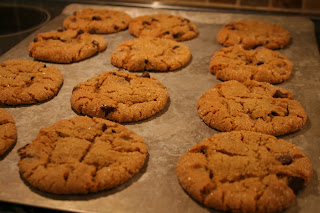 Peanut Butter Chocolate Chip Cookies
2 cups Flour
1 1/4 cups Brown Sugar
1 1/4 cups Sugar + 1/4 sugar
1 tsp. baking soda
1 cup of margarine
3 egg equivalents from Ener-G Egg Replacer
2 tsp. vanilla
1 cup peanut butter
Preheat the oven to 350 degrees Fahrenheit. First cream together the sugars and margarine with a mixer, setting aside the extra 1/4 sugar for later. Next add the vanilla, egg equivalents, peanut butter, and baking soda and mix well. Scrape the sides of the bowl in between mixing. Add the flour and until it is consistent mixture. Stir in the chocolate chips or mix them in with your hands. Make dough into golf ball size balls, and then roll in sugar until well coated. Bake in over for 14-16 minutes or golden brown. Makes 2-3 dozen cookies depending on size you make them.
at 3:19 PM No comments:

Email ThisBlogThis!Share to TwitterShare to FacebookShare to Pinterest
Labels: Desserts

As my children grow older, we begin to venture into the realm of vegan family politics. My eldest is beginning to notice he eats differently than other people. He attends an ECFE class as does his sister. They each have sibling care when the other is in class. There is typically a snack time, and goldfish crackers are a common selection by the school. I am not sure why these are so popular as they don't seem to be a healthy, wholesome snack regardless of not being vegan. We brought in Eco Planet Cheddar Non-Dairy crackers for them to eat at snack time. Today Elliott talked about his classmate friend having" fish" and that he did not eat fish. He loves the Eco Planet crackers, and for now is happy with this alternative. As peer acceptance becomes more of a priority we'll have to decide how to handle that.

The political aspect of family food choices is a challenge for me. While I feel strongly about following a vegan diet, I feel the same way about respecting other's choices. That doesn't mean I am against promoting a vegan lifestyle, I am all for it, but in a positive constructive way. When I first became a vegetarian, I remember being ostracized for eating dairy and eggs. It totally turned me off to the idea of abstaining from them, and only eventually made that choice after getting there on my own terms. For these reasons, I struggle with the best way to discuss other's eating meat and animal products in a way where my child will not feel superior to others. I absolutely loathe religion being shoved down my throat, and can't help but see some parallels between the two.
When we discuss it now, my explanation for eating the way we do is simple, keeping in mind the age of the audience. All we say, is that we do not eat those things because we do not have to. Elliott came up with his own explanation for why we don't eat meat, because "they would be sad." He was 32 months old when he determined this. It was interesting to witness the "ah-ha" moment of understanding what it means when people talk about eating chicken or turkey. There is no hiding what it comes from like cows or pigs. We had just seen wild turkeys at the nature center by our house, and at lunch I told him I was making a veggie turkey sandwich when he inquired. A quizzical look fell upon his face, and he asked about the turkey part. I assured him it was not actually from a turkey, and that is when he divulged the "it would make them sad" explanation. I guess I never thought about having this moment since we are vegan.
It is interesting to point out how completely comfortable others feel at questioning our decision to raise our kids vegan. I often wonder how well it would be appreciated it I did the same for religious beliefs someone was teaching their children, but I "do unto others as I would prefer them do to me." While veganism is not a religion, it is much more than a diet. It is more accurately described as a lifestyle, which follows compassion. This is clearly founded on moral beliefs, the same as religion, but most people do not seem to view it as such.
As veganism becomes more mainstream, I believe this will become less common. It is amazing to see how far things have come from when I first choose a vegan lifestyle over 10 years ago. For now I will try remain optimistic about what the future will bring in this regard, but like any other parents we are figuring it out as we go along.
at 10:10 PM 1 comment:

This holiday season I was all about trying new recipes. For some reason I just couldn't get enough gingerbread. I made muffins, cookies, and scones. These are made using the recipe from "The Joy of Vegan Baking". The second time around I tweaked the recipe somewhat, adding more spices and a little more sugar. They are drizzled with maple icing. My best test for checking to see if a new recipe meets the grade is what I call the toddler test. The truth is toddlers don't lie. If it doesn't taste good they simply won't eat it. Evelyn and Elliott just couldn't get enough of these. 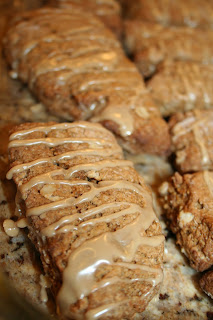 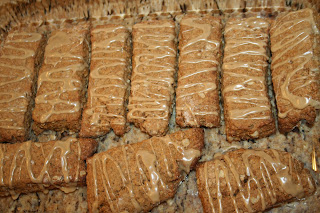 This year I really wanted to participate in a vegan cookie exchange, so I organized one for the beginning of the month in December. Yeah, yeah, I am really behind posting about it, but was busy during the holiday season.
Here is a picture of the cookies from the exchange. The types of cookies going clockwise are Gingerbread Cookies, Russian Tea Cakes, Cranberry Pistachio Shortbread Cookies, Magical Coconut Cookie Bars, No Bake Chocolate Oatmeal Cookies, Snowballs, and Chocolate Chewy Cookies in the center. 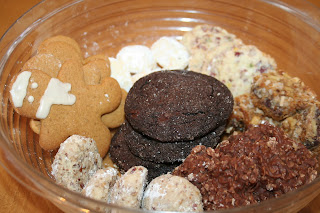 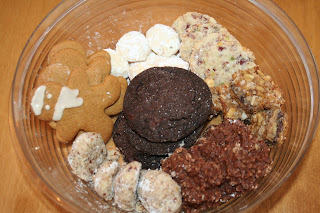 It was a lot of fun trying so many delicious cookies and expanding the number of recipes for future use. So far I've already made two of the new recipes. My 14 month old daughter, Evelyn, said cookie for the first time, when asking for more of the Chewy Chocolate Cookies. They were just that good. My husband declared them his new favorite cookie. He loves brownies and they were reminiscent of a chewy, moist brownie.
When I was younger, my grandma always had Keebler Danish Wedding Cookies at her house for me. They were my favorite. Ever since choosing a vegan lifestyle, I've wistfully thought of a vegan version of those cookies. It was a pleasure to try two kinds of this type of cookie through this exchange with the Russian Tea Cakes and Snowballs. The only reason I haven't tried baking them yet, is concern over my self-control once they are made.
The No Bake Chocolate Oatmeal cookies also brought back childhood memories, as my mom made these all the time. I've veganized her recipe, but it was nice to try another take on it. There really is an art to getting them to set right, and these were perfect.
Among all these good cookies were tasty Cranberry Pistachio Shortbread Cookies. I've never made shortbread cookies before, but am eager to try out this creative recipe.
Lastly, and I think my new favorite were the Magical Coconut Cookie Bars. Graham crackers, chocolate, coconut, and pecans. These are a few of my favorite sweets, and they were fabulous all together.
I hope to plan another vegan dessert exchange again this year with bars, muffins, and donuts. There is nothing better than sampling so many new vegan goodies - well except not having to bake it all yourself!
at 10:14 PM No comments:

Here are some pictures of our New Years Eve fondue night. It was pretty darn tasty, and the kids got a kick out of it. Next year we will probably just skip the broth. Deep fried veggies are delicious (not much of a surprise there). As you can see Elliott enjoyed the food quite a bit. 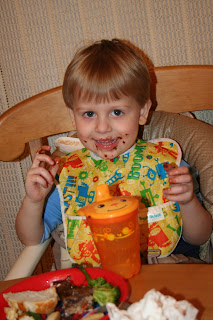 Here is a picture of the bread dipped in cheese. We used the Leahey's sauce mix for this. It worked pretty well, and the kids love this cheese sauce. 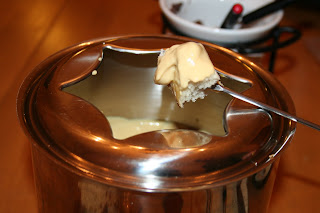 As you can see, fondue with toddlers sometimes requires a one-handed approach. 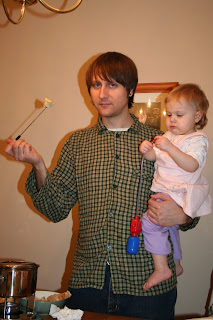 For dessert we dipped bananas and Dandies marshmallows in chocolate. Mmmmm! 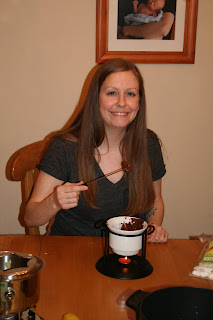 All in all it was a fun way to incorporate the kids in the New Years Festivities. We also had a bottle of sparkling cider, which Elliott could not get enough. He does not drink soda, but he definitely enjoyed the bubbles in his juice. Happy New Year!