Magical Pink Salt, Getting Your Kids to Eat Their Veggies 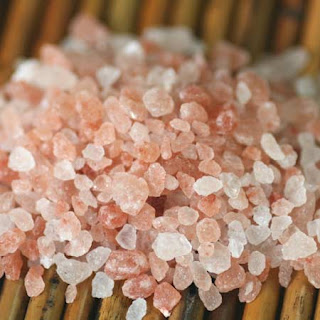 A common question that people often ask is, "How do you get them to eat that?" Typically it is in reference to vegetables, but not always. Our kids often eat all their broccoli or cauliflower first and ask for more before eating anything else. No we are not miracle workers. There are a few simple ways you can achieve the same willingness to try new things, and often new foods will become well liked.

1) Eat the vegetables yourself. It sounds silly, but kids notice what you eat. I put this one first, because I think it is the most important. You are your child's model. Every time I sit down at the table to eat, I start with my veggies because they pick up on that. Typically a child will eat what they like best first, so when they see you chow down all your broccoli first it makes an impression on them. I've actually watched my son observe me doing that, and then pick up whatever I was eating, finish it off, and ask for more.

2) Try, try, try again. If they don't eat it, continue to offer it to them even if they leave it on their plate. Eventually they will try it. Trust me on this one. It may take 20 times, but you will break them down.

3) Never force them to eat more than a bite. Trying the food should be praised with a "nice job trying that" and then move on. Don't make a big deal about it, because if you do they will file it away as a way to push your buttons later or create a power struggle.

4) It's all in a name. Be creative with what you call the food. If they like dinosaurs, call broccoli dinosaur trees. Our kids eat roasted kale and spinach because we call them kale or spinach chips. What kid doesn't want to eat chips? Once we made polenta patties and my son wouldn't eat it. The next time I made it, when I presented it as a corn chip he ate three of them. Since my kids like broccoli, I called cauliflower "white broccoli." I'm not wild about being dishonest, so once they eat a new food and proclaim it edible, I always say, "this is also called X."

5) Special colors or pointing out brightly colored food, often makes something appealing. I recently bought unprocessed Himalayan pink salt, and used that as a motivator to try new things. Whenever they were reluctant and it was appropriate to add salt, I offered the "cool" pink salt. It worked like a charm. My son also really like the fact that he could grind it himself.

6) Try new things when they are really hungry. If they eat poorly at breakfast, try something new at lunch. Put out the new food first.

7) Grow your own vegetables and have your child help. Even if it is simply putting seeds in the ground, watering, or pulling up carrots. They really enjoy learning about where food comes and being a part of the process. You don't need to start a huge garden, just try one or two things that you'd like your child to learn to eat.

8) Have them help prepare the food. The first time our son had cauliflower he ate tons of it, because he helped break it up into smaller pieces.

These are what worked for us, and I am not claiming in any way to be an expert. The majority of these ideas came from books or ECFE. Right now my son is in a really picky stage, so we have to work harder to encourage him. My daughter is still at the "eats most anything" stage. We'll enjoy it while it lasts!
at 10:23 PM