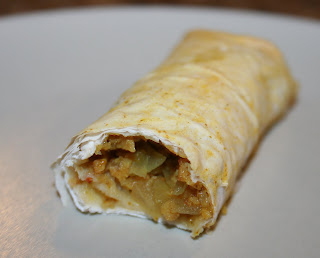 Although it was my first time making these, awhile back my husband made them, and I remembered them being quite tasty. I was eager for a shot at making them myself.

This isn't an appetizer you'll whip up quickly, if that is what you seek. I was lucky to have my hubby around this week, so I could work on these during the kids' afternoon nap.

Next time around, I've got a few ideas for speeding up the process. First, I'd probably chop it all in the food processor versus hand chopping it all. You have to let the filling cool after cooking it, which does add to the preparation time.

The adapted recipe originally comes from Cooking with Peta: Great Vegan Recipes for a Compassionate Kitchen. Although I am not a huge fan of PETA (I think the publicity stunts more hinder than help animals rights cause), the cookbooks we've received as gifts have been good.

For brushing on top:

1/2 cup vegetable broth
1 tsp. curry
9-11 sheets of phyllo pastry (depending on size you make them)


In food processor, combine onions, garlic, jalapeno peppers. Cook in frying pan with a very light coating of oil (less than a Tbsp) on medium heat until water cooks off. In processor combine the remaining ingredients, except for the TVP. Add to cooked mixture, and cook off the water again. Remove from stove and stir in the TVP. Let mixture cool.

For brushing the tops, combine vegetable broth and curry powder in the microwave until it dissolves well. Let cool.

Preheat oven to 400 degrees Farenheit.
Cut phyllo pastry into rectangles approximately 6 inches x 5 inches. Layer 3 to 4 rectangles on top of each other, then spoon 2-3 Tbsp. of filling onto the corner. Start to roll the pastry until you have rolled it halfway. Fold in the corners like an envelope and finish rolling (like an eggroll). Place seam down on a lightly greased baking sheet. Brush tops with veggie broth mixture. Cook in oven 15 - 20 minutes until golden brown.
at 8:27 PM

Email ThisBlogThis!Share to TwitterShare to FacebookShare to Pinterest
Labels: Appetizer