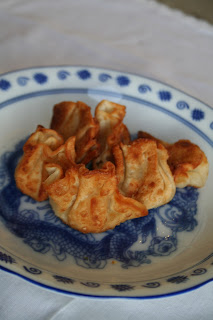 What is that you say, there is vegan cream cheese? Of course there is, but most people count it out without even trying it. In fact, there are multiple brands to choose from including: Galaxy Foods Cream Cheese, Better Than Cream Cheese by Tofutti, Follow Your Heart Cream Cheese, Creamy Sheese, and Dr. Cow's Cashew Nut Cream Cheese. Which is your favorite?

Every person I know who've tried it says the EXACT same thing: "this tastes just like cream cheese," to which I laugh, because it IS cream cheese - just not from cow's milk.

These were so simple to prepare, and my hubby would make "the last batch" only to determine another round needed to be fried up. He is a lucky man, in that he has an extraordinary metabolism of which I am extremely envious. He could.not.stop.eating.them!

Guess I know what to make for his birthday dinner coming up. At the store, I didn't see wonton wraps, and just picked up pot sticker wraps. They worked out perfectly. 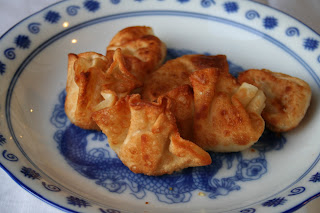 First chop up the green onions. Pre-heat oil in small frying pan or deep fryer if you so choose on between medium-low and medium heat. A 1/4" layer of oil in the frying pan worked well for us.

Assemble wontons by adding 1/2 tsp. green onions to each and 3/4 tsp. vegan cream cheese. wet the edges of the wrapper by dipping your fingers in a bowl of water. Pinch together and add to frying pan.

Cook until brown on one side, and flip to brown other sides. Warning: they cook fast, but that is a good thing right?

Remove from oil and let cool on a towel to soak up excess oil. Serve hot, and just try to keep them around for longer than a few minutes. They won't last I promise you!
at 5:06 PM