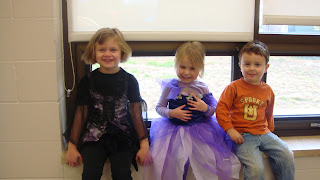 The second annual vegan Vegkins Halloween party was a success. Twin cities represent! To keep it simple for food, we did a potluck again. I can't think of a more perfect way to learn new family friendly recipes, than having parents make their favorites at a potluck. If you are looking for other party ideas, check out my previous posts on Easy Vegan Halloween Food, White Chocolate Ghosts, and Homemade Halloween Candy.

There were a few Halloween themed goodies I just have to share with you. The first was a mom's first time baking vegan, and boy did it turn out delicious and festive! She told me that the recipe came from Veg News, which was linked up to Chef Chloe's recipe for Witches Fingers, you know the one that won Cupcake Wars on the Food Network. Yep, a vegan cupcake took the cake so to speak! 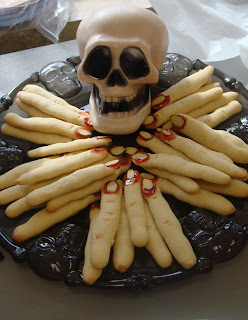 The next thematic dish was spaghetti worms with veggie meat eyeballs. Not only was it eye-catching (get it, eye catching), but it was a festive dish for our event. This was made by Betsy, who also shared her technique for peanut butter blossoms. She has some mad talent! 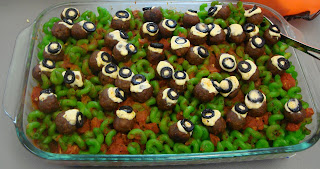 Not only did she make the kid-friendly spaghetti dish, she also carved this awesome brain watermelon. It looked fabulous! 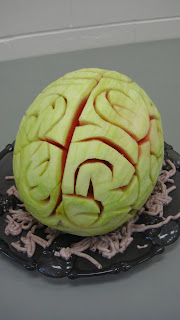 I could go on and on about the other food, but lets get on to the fun had all around, with a craft, games, and a costume contest. Here is Anna from These Little Piggies have Tofu working on a Halloween mobile. 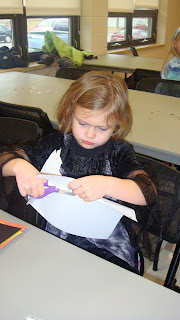 Between meal time and games, the kids all created a kid "mosh pit" type of game inside at folded up gymnastic floor mat. Kids really can have fun with just about anything! 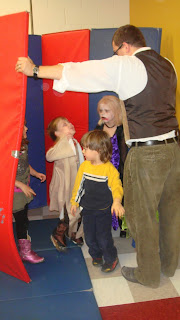 Al and his wife Jen from These Little Piggies Had Tofu, planned the games for the party. They did not disappoint! The first was a musical shapes game. The kid's danced to music, when it stopped they needed to find an animal to stand on. Everyone played until they all had a chance to win. 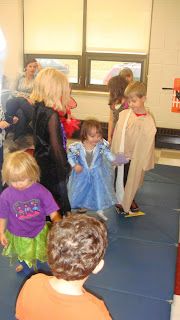 The kid's loved Pin the Tail on the Cat, and some wanted multiple turns. Look how cute the kitty cat blind fold glasses were for the game! 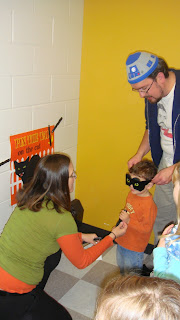 At the end, we announced winners of the costume contest and then everyone got a treat bag full of vegan goodies to take home.

Do you attend or throw a vegan Halloween party for your kiddos? If not, you can always start up your own group. A fine place to start is Meetup.com online. There are vegan meet up groups all over the country on there, a perfect place to meet other parents. Our group is linked in with the Animal Rights Coalition, which send prospective families our way as well. Happy Party Planning

Don't forget to enter the contest to win either some butterscotch chips or a copy of 30 Day Vegan Challenge.
at 8:46 PM