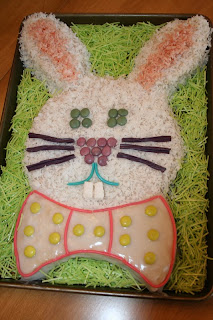 Now that Easter is right around the corner, I thought I'd post information for the bunny cake I made last year. It is a vegan gluten-free coconut cake. Ironically it is from a cake mix and canned frosting, something I've rarely used in the past. When I was toting around a 6 month old and chasing a 2 year old simultaneously my typical aversion to the simple box cake option went out the window.

I'll admit it, sometimes it is nice to take the easy option. This year I'm going the lazy route again. If you are interested in making this it is really simple. I used a Cherrybrook Kitchen vanilla cake mix and frosting. You bake two 8 or 9 inch round cakes. One is used for the face and the other is cut to create the ears and bow tie.   To determine where to cut, imagine you are cutting along lines similar to the lacings on a baseball. Place all the pieces together like shown above, and then frost. Immediately after frosting, sprinkle with coconut until layered well. I used Whizzer's Chocolate Beans to make the eyes, nose, and polka dots. The whiskers/mouth are made from Twizzlers, and the teeth are cut out from vegan marshmallows. The insides of the bunny's ears are coconut dyed pink.
at 9:09 PM