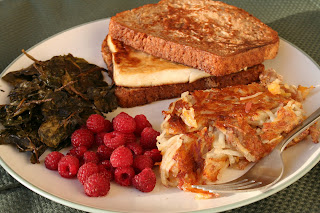 Awhile back my son randomly threw out a comment about making a french toast sandwich. It sounded interesting, so I shelved it in my brain to revisit at a later date. Today became that day.

Our "go to" recipe for french toast is in a past post, so I'll focus on how we made the tofu and "cheezly" hash browns in this one. Once I made homemade hash browns, we were struck with how simple it is to do. Really it is not hard.  For the record, we worked on preparing everything all at the same time, so the food would finish approximately at the same time.

Prepare 2 potatoes per person you plan to serve. Wash the potatoes, then start to heat the oil in the frying pan using 1 tablespoon per 2 to 3 potatoes.

Shred the potatoes in a food processor leaving the skins on (there is great vitamins in there). Remove the shredded potatoes and dry with a paper towels, and put into hot pan with shredded cheese added on top of the potatoes.

Cook on medium heat until browned on one side, flip, and repeat for the second side. Remove when fully browned and eat hot!

To prepare the tofu, we pressed it between two plates (still wishing for a tofu press). Marinate in maple syrup for 10 minutes after pressing it, making sure to brush the tops with it. Lightly spray and heat a non-stick skillet or griddle on medium.

Add tofu and cook on one side until brown. Before flipping, lightly spray uncooked side, flip it and cook until brown. Place between two slices of french toast and enjoy. If you want a stronger maple flavor then add a little to the top of the tofu.

Don't forget to go and enter the Mofo contest this week for a chance to win a $25 gift certificate to Vegan Essentials.
at 10:51 PM