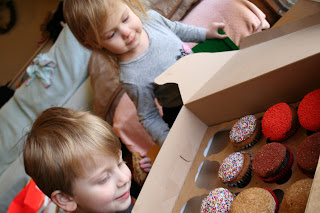 Way back early last summer, I purchased a deal for 50% off of $40.00 worth of baked goods. I was quite excited to hear of another option for vegan goodies. If you've followed this blog you'd notice the heavy influence of my sweet tooth.

I really enjoy baking, so it took awhile to get around to using the coupon. We picked up four different types of cupcakes and a couple muffins. The cupcakes were: gluten-free, chocolate cinnamon, apple spice, and chocolate pumpkin. Lastly were the lemon black tea muffins. These were by far our favorite, though we couldn't taste the tea. My hubby wasn't fond of the crunchier outer edge of the muffins. 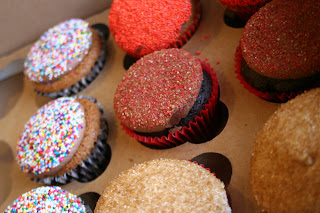 ﻿
The cupcakes were okay, but I wouldn't spend $3 a cupcake there again. We wanted to like them, really wanted to. They weren't awful, but weren't anything to write home about. They all were more muffin like in texture than a cupcake. Some were really dry, while others too dense. Hopefully they will look further for great vegan recipes. In the meantime, skip the cupcakes and get a muffin.﻿ Maybe we caught them on a bad day, because the ones brought to the Vegkins Halloween party were getting good reviews. We'll probably check them out again, to be sure.
at 1:44 AM