Back in the spring we received an issue of VegNews, and there was a quiche recipe. I'd been thinking about trying one out, but been a little lazy about tracking down a recipe. My husband and I can hardly ever make something without altering the recipe, and while this one was good we spiced it up a bit. The original recipe was sans cheese, but we decided it would be a good idea to add some Cheezly.

Once it was done, we put it to the toddler test. My youngest chowed down, and our oldest was a little more reluctant with all that "green stuff" in there. In the end he picked the spinach and liked it pretty good. The leftovers were heavily coveted and it was a show down to see who would get the leftovers for lunch. Brian won. 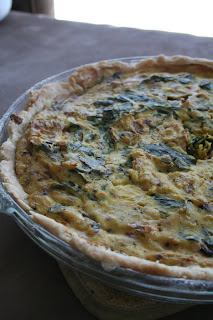 The next time we made this, Brian pulvarized the spinach in the food processor. When we mixed it in the quiche looked like something out of Dr. Suess's "Green Eggs, and Ham." It was a scary electric green and didn't look appetizing. Ironically, Elliott had no problem eating it, since it had no "chunks of green stuff" in it. Go figure.
at 1:28 AM